I thought I would post an update before I had a mutiny on my hands. I know I need to be a little better about the updates. Especially since almost everyday the little peanuts reach a new milestone that is reason for celebration.

Poop turns from black to green to yellow...celebrate!

Less than three apnea episodes in a 12 hour period...celebrate!
Upgrade from giant ventilator breathing tube to nasal canula...celebrate!
Opens eyes and moves tongue around during holding time...celebrate!
Gain an ounce in ONE day...CELEBRATE!!!!


Pictures you say? You would like to see our darling little munchkins? Of course! I have to confess that their dad kind of held me off from posting pictures until they all had a nasal canula. The ventilator and the CPAP (tube type apparatus that helps them breath - Gma D thinks they looked like Star Wars characters with it on) kind of covered their entire faces. So now that everyone is on a canula (seriously, you have no idea how happy we are about this!) pictures should be more forth coming.


Another reason a canula is so great is because we can do so much more with them! By so much more I mean we can hold them once a day for about an hour. It is the absolute highlight of my day times three.


Here is our little Gabe. He is so sweet and so patient with us. He seems so chill. He was back and forth on the vent then CPAP then the vent again... So he has been very happy to have his eyes back and able to look around. He has the most adorable round eyes. 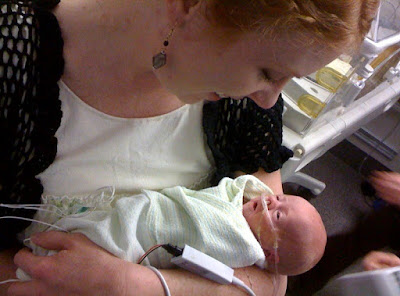 I don't care what they say about reflexes or gas or whatever. My babies smile at me. Real smiles. 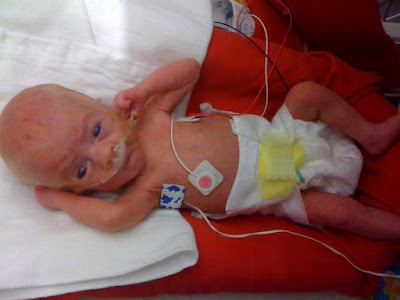 "Hey, what in the sam hill is going on? When do I get to go home? And don't they have diapers that fit? Up to my chest AND it sags? Really? Ridiculous." 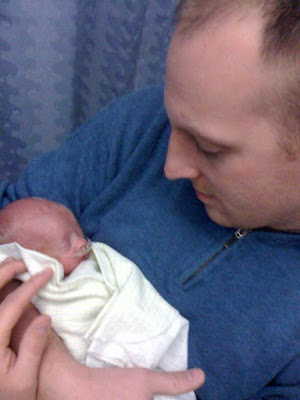 So happy with his dad.

So Christian has been our little champ this whole time. First born by one minute, baby A leading the way. He has pretty much been on a canula since day one and has been a little spit fire. The nurses like to bundle and tuck in the babies when they are in their isolettes because it gives them the sensation of still being in the womb. MOST babies think this is the bomb. Not our Christian. He gets bundled and tucked and 15 minutes later he is s-p-r-a-w-l-e-d. I think it is because he was on the bottom and was squished for 5 months. He is a mover. I think one day I will show up and he will be helping the nurse type up her charting. Or down the hall fetching a blanket for Sunny or Gabe. 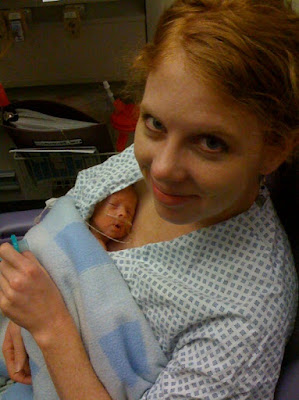 Once he gets settled (this takes a little while) he LOVES to cuddle with mom. 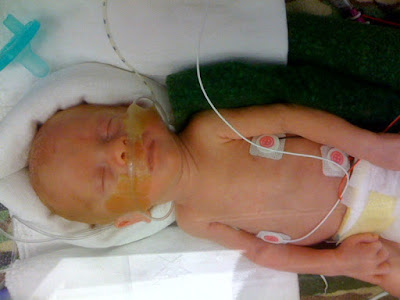 Isn't he huge? He has filled out SO much. As of yesterday, he weighed 3lbs 3 oz. You can't tell in this picture, but he has his mom's hair! We have been going over the comebacks to the taunting. "Carrot tops aren't green!" or "Your mom would pay to have my hair color!" Although that last one doesn't go over too well in 2nd grade.

Our little Miss Sunshine! She has just been on her own schedule. While her brothers seem to be in a hurry to move to the next step, she just does not care about anyone else's time frame but hers. She was on the vent last week with plans to extabate on Sunday or Monday. But Saturday, she decided to extabate herself. She stopped breathing around the vent and they had no choice but to extabate because her tube was too small to turn up the O2, so the next step was CPAP. Then within 3 short days, she was on a canula. She is so pretty. All these pictures have been taken with our phone, so they are not the greatest. And they don't really do her justice. 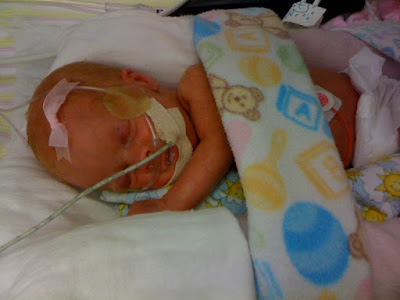 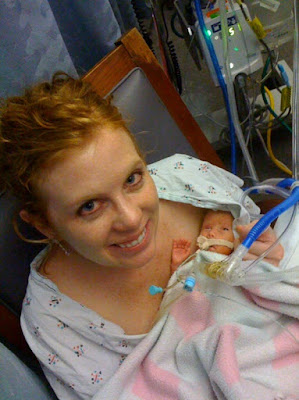 This was the first time I got to hold her. She was still on the vent as you can see. But she still loved it. She looked around the whole time and told me she loved me by not needing extra O2 while she was out of her isolette. 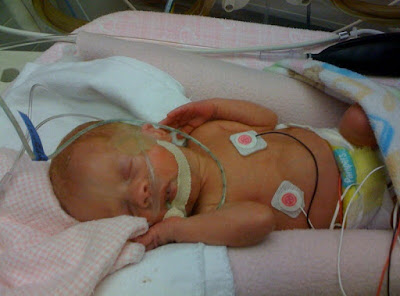 I told the nurses to take a break on the bows in her hair because she was getting a little bald spot! Good gravy these little ones are fragile. We love our litte daughter. She weighs just over 3lbs and is doing great with the breast milk.
Speaking of breast milk, I've been very religious about pumping every 2-3 hours. So I'm on the baby schedule without the baby. Talk about ridiculous. I feel like a cow everytime I pop those bad boys on and turn on the mechanical pump. But I know it will be so worth it for them. All three get my breast milk through a tube. Christian and Gabe have theirs in the nose and Sunny's is still in her mouth. They each get between 22 and 27 milliliters every 3 hours. I'm pumping a little more than what they need however. Each time I pump I usually get about 250-300 milliliters. Isn't that insane? Our freezer is full and we recently bought a deep freezer to store the gallons of milk they are not eating. I have my own shelf in the NICU freezer. When I'm there I pump and give them enough to last the 24 hours until I come back the next day. Pumping, pumping, pumping, pumping. That's what the pump sings to me everytime I turn it on. Pumping, pumping, pumping....
Okay. There are the update. Sorry to leave the last image in your mind of a cow being milked. We love our little brood so much. We are so thankful for all the prayers that are continuing to be said in their behalf. They are so grateful for their fan club and everyone that already cares about them and loves them!
Posted by kara at Thursday, February 04, 2010

Email ThisBlogThis!Share to TwitterShare to FacebookShare to Pinterest
Labels: babies

Thank you Tahnk you. Its so hard being so far away and not getting to see them in person. They are beautiful. Its amazing to see how they filled out on just a few ounces of weight Keep an eye out for the mail. Kisses and hugs for everyone. Love you. Grandma and Grandpa

Thanks for posting. I love your updates. So glad to hear they are progressing so well. They are all so stinkin' cute!

Congratulations!!! Can't believe how much bigger the babies look from your last post.

Thanks for the update - I have been checking daily. You look so happy in your pictures with your kids. I am glad you get to hold them each day - I'm sure that is your highlight. I would love to come and see you and that babies, but not sure if that is a good thing at this point so I will wait a little longer. Take Care

Precious, precious, PRECIOUS! That is all I can say! I am so glad you found time to update, among all the other things you have going on! I feel so special that I got to behold these little miracles with my very own eyes! They are so beautiful! I look forward to the next update! :)

I am so glad to hear that things are going so well!! I've been checking every day for a new post. Glad you found a little spare time to do it. They seem so much bigger than they did in the first pics. That is so great! They will be home and reaking havoc in no time!! Congrats again!

They all look fantastic, Kara!! Unbelievable. You've made me cry again. I'm so happy for you and Chris.

They are all, of course, adorable! I was so excited to see an update, even if I hear it from you fairly often. We love all 3 of them and need to come visit soon!

Oh I am so excited for y'all! They are oh so precious and growing so good!! Keep it up babies!!

Oh man, how amazing! My heart is just overflowing with joy for you. What darling little babies! I'm so glad that they are progressing and doing well! Isn't it great how you can sense what their personalities are like?

I hope you don't mind that I share this: When we brought our daughter Kate home from the hospital, immediately I felt unqualified and unprepared as a mother. As I sat in the chair holding her, I half-jokingly, half-seriously said "I really hope you knew what you were doing when you chose me as your mother. I hope you wanted me." And right then she gave me the biggest smile in the world. My point is that I have no doubt that your babies smile just for you. Those smiles are most always intentional I believe. Thanks so much for posting!

Gah. Sorry. This is Nicole Foust by the way.

Kara! What beautiful babies. You are truly amazing.

Put the whole clan on the prayer roll in Oakland last week. Love "hearing" the update in your voice and getting the latest from Megan. Love and prayers for continued progress. Those kiddos are darling and you're a pumping warrior! Amazing...