Although the winds blustered and blew us around, (at one point, I think I was actually running in a diagonal slant) good times were had at the Super Dale 5K! There really is nothing like running FOR someone. I only live in the same community as Dale. I've never met him. But it was sensational to come together with your family, friends, neighbors to do something fun for a purpose. It was touching to see a few athletes there with disabilities gearing up their racing chairs in support of Dale.

Often I think how thankful I am for my body and abilities after I go running. I feel so good as my lungs work at full capacity and blood pumps to my limbs, brain, heart, fueling my desire. On this day I felt especially grateful. I hope Dale and his family are finding peace with this sudden curve ball life has thrown at them. 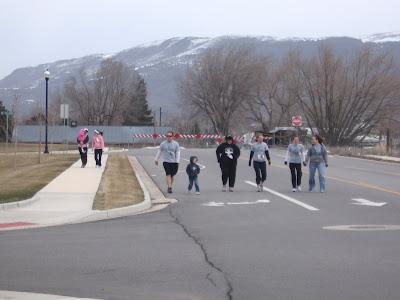 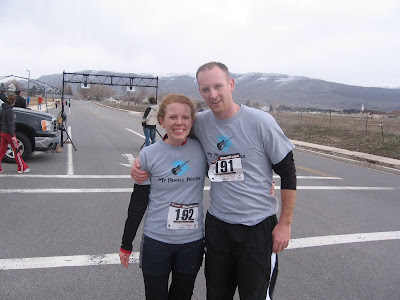 Yes, we wore matching shirts. Deal with it. Chris skeedaddled home right after to rescue our neighbors from their kind act of triplet-sitting.

Other BEST parts of the day? All the people that raced with me! Chris ran with me which was stupendous. I paced us the first half, then he decided he could go faster. I kept up with him (it was fast!) but I knew he couldn't hold it. How rude does that sound? Nothing worse than an arrogant runner. He eventually slowed down, admitted he was tired and we finished together. The race was actually .25 mile longer than a 5K. Our average pace 9:24. 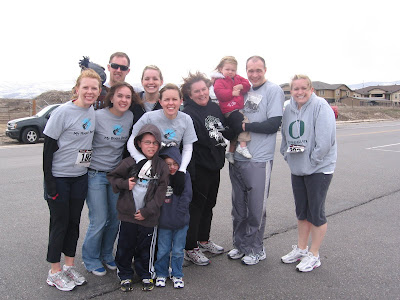 My sister Shauna, her husband Rich and their 7 year old, Alex also ran. My brother Michael, his wife Mindy, Mindy's sister Kim and her husband Matt joined the racing fray. Michael did a ridiculous 6 something pace. He finished in 24 minutes and change.

My mom raced. My mom raced! Why two sentences to announce this? Because it was her first ever organized race! We were all tremendously proud of her. My mom started her current career in her nearly empty nest years. Also, at 50+ decided that she was going to take up races. (She's also a future Ragnar finisher.) She is inspiring. Most would say, "eh, maybe if I was younger..." Most think that things you have done in your life, at a certain point, are what define you. The End. No more new adventures. She inspires me to always keep hold of new dreams and go after adventures not yet experienced.

Big hoopda hoop to Jenna for watching everyone's kids in the back of Shauna's Pilot while the adults pranced around. Cute picture here. Big hoopda hoop to my great neighbors who came over to our house at the last minute to watch mine. (Did I mention there were gale force winds blowing?) 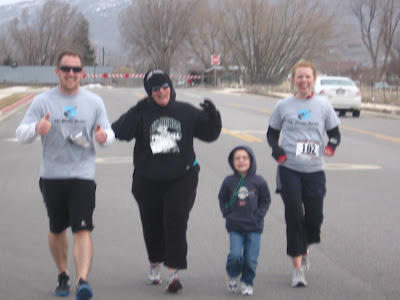 Hooray, the finish line is up ahead!

Post race we feasted on an early lunch. Lunch was much less windy since we ate indoors. It was also delicious. 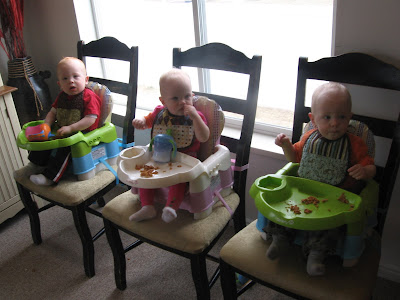 They were a little bummed they missed the big race, but said the pasta salad I made for lunch helped make up for it. 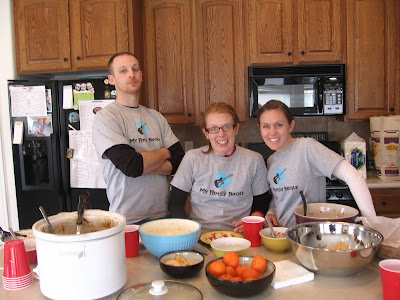 Chris, some weirdo who was trying to look like a turtle for some reason and Shauna

I have another worthwhile 5K to promote! Stay tuned...
Posted by kara at Wednesday, March 23, 2011

Thanks Kara, it is actually you kids that inspire me. Got to get some form though, I don't care if I look fat, I do care that I look retarded!! Finished the workout today just under 3, tomorrow I am going for 3 again!