Remember when I mentioned my running blog is merging with this one? Not one running post since then. I think my running-self was a little hurt it didn't get it's own space in the interweb anymore. We're trying to simplify around here.

I have been running (a lot actually) still. But I just read a story about a friend's very first 5K and I had to share it. I am a HUGE fan of first time racers. I love to hear their reasons and how they did and how they felt. Love it. (Keep that in mind if you ever have a first race story to share. Share it here!)

Without further delay, I give you Karen's first 5K. Make sure to tell her good job! First comes the 5K, then comes running a half-marathon with me. Right Karen?

I really like running! I used to think that was a crazy statement when I played highschool soccer and during tryouts we never even touched a soccer ball. We ran and ran and ran a whole lot more. I never even put on shin guards or cleats. Just running shoes (and shorts and shirt). I hated running and swore I would never do it again.

But then I went to ricks and the cool place to be at night was the school gym. All the buff guys were there and liked buff guys. Most of the time I never made it to any equipment but every so often I jumped on a treadmill and cranked it to 5.5 mph. And it was then that I realized I really liked running, but only on treadmills and I got up to 6.5 mph. I started running a mile and then two, then three and one time even 6 miles. But 6 miles was a one time thing.

I mostly stayed at 2, maybe 3. It might seem silly to say I really like running when I only run 2 miles but I feel good afterwards so I can say I like it. So the past couple of years I have decided I want to run a 5K. Probably an easy task for some but I have been so nervous about it. Like I said, I only like running on treadmills. Running outside hurts my lungs and I get really tired after a half mile. Plus I don't want to finish last. But I might because I run slow.

So.......last friday Weston wakes me up in the morning and says, lets run a 5k together tomorrow. My eyeballs opened up and I froze!! I can't run 5K tomorrow I thought. I haven't run in a month and I need to train for something like that. I mean 3.1 miles for me is a long ways. And outside????? So scary. But all what I said to Weston casually is, "okay. Is it going to be nice outside?" Something I've learned about Weston is that when he doesn't know the answer to something he makes an answer up. So he says, "Ya, it's going to be really nice." So we signed up that afternoon. I was so nervous all day.

That night I was watching the weather on the news. They said, it was going to be snowing in the mornning so all of those die hard runners doing the 5k tomorrow better bundle up. Oh. My. Gosh. Did he say die hard runners?? That is so not me and SNOW for my first 5K??? My lungs are really going to hurt!!!! I couldn't sleep that night. Way too nervous. We get there late of course and start the race in the very back. The boise state track team was there in short shorts and tank tops. And Yes it was Snowing!!!! I guess nobody told the track team. The horn blows and we are off.

Of course Weston promised to stay with me the whole time but he is sprinting. Not going my 6.5 speed, but I did great for 2 miles. We were passing people like crazy. And then I thought I was going to die! I think my lungs were frozen. But I couldn't stop. For goodness sakes I can run 3 miles without stopping. But I stopped. For about 5 seconds and people were passing me. And that made me mad. I am so competitive I had to beat the people who passed me. I ran the rest of the way and finished my first 5K!! 1,000 people beat me but I beat 1,500 people so I'm good with that. Plus I was on the news that evening! I didn't really like running a 5K but last night on the treadmill I ran 2.5 miles easily so I think I will stick to my treadmill and my 2 mile run. 3 is way pushing it! 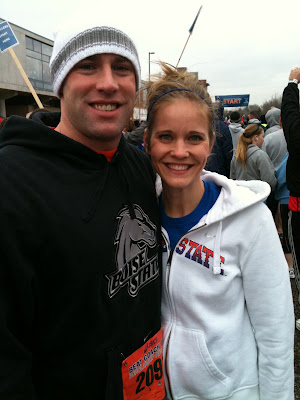 Before the run, I was so nervous! 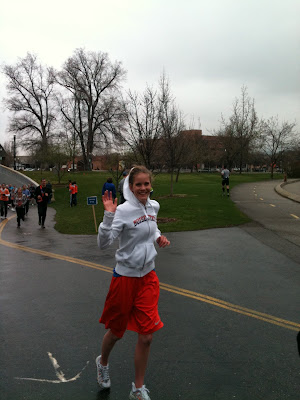 Proof that I did it! And I had to wear those big huge orange shorts. It was a boise state run!! Look at all those people behind me, whoo hoo!! I beat them.

I don't know this chica, but she is cute and at about the same running level as I am, so I think she and I should be friends.