To Work Or Not To Work shouldn't really be the question

I was recently quoted in a Salt Lake Tribune article.  Remember Hilary Rosen saying Ann Romney never worked a day in her life because she stayed home with her kids?  I had a few things to say about it.

I was still kind of fired up from my passions post, and this seemed to go along with women and their roles.  It's very important to me to stay home with my nuggets.  I realize this isn't always a black and white choice for most women.  I know the church I belong to encourages women to be the at home nurturer.  But I've never felt pressured or coerced or forced to be the mom who doesn't work.  I also know my church leaders have said it isn't our place to judge another woman and her decisions in regards to working or not working.  Which I felt to be true, even before I heard it.

A commenter accused the women quoted in the article of defending Romney because she is mormon and if the Rosen had said the same thing about a hispanic woman, a muslim or Michelle Obama, we (mormon women) would not have the same reaction.

I'm only one mormon woman, not the entire demographic, but I can say with an emphatic YEAH RIGHT that is definitely not the case.  We women can't afford to stay segregated in little groups.  Of course we all have different view points and ideals, but if you strip away political parties, sexual preference, religion, race, education and views on work, I'm sure we all have similar needs and desires.  We want to be heard, to be validated, to have equal opportunities and to be loved.  And as mothers, we want the same things for our children.  We can't do this while we are accusing each other of working or not working, defending a mormon vs a muslim or putting one another in categories.

While I did mean what I said in the article about being frustrated about what Rosen said, what didn't get included is my belief that ALL women are warriors and they do what they can.  Most mothers always have their child's best interest at heart.  In fact, another mother quoted in the article really summed up how I feel.  I wish I would've said this:

"I think women need to stop talking about which is better," said Herzog, who has an MBA and is a social media manager at a local bank. "That’s counterproductive to what we need to be doing. We need to work together to move forward to get more rights for women. Instead of putting energy into a debate between moms, we need to work together to make sure our kids are getting the best of what they need."

Because that's how I feel too.

If you're going to judge me on anything, judge me about letting my kids think swim diapers are hats and letting them wear them around all morning.  And thinking it's hilarious. 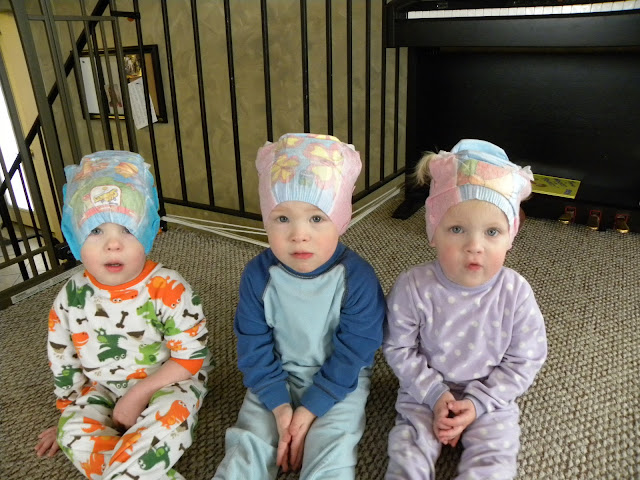 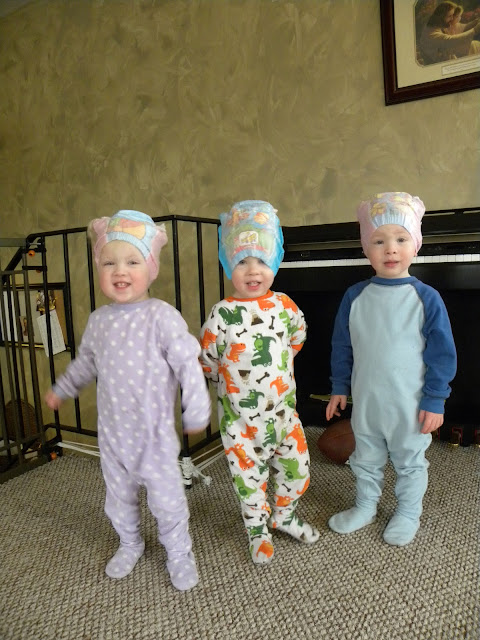 Also, not that this is relevant to the debate, while I'm not 100% Obama is getting my vote again, I'm not entirely thrilled with Romney as the GOP nominee either.  Being a mormon does not automatically get every mormon vote.  Just saying.
Posted by kara at Wednesday, April 18, 2012

Email ThisBlogThis!Share to TwitterShare to FacebookShare to Pinterest
Labels: Romney vs Rosen debate, SL Trib article, What I Believe, women

the picture is amazing. literally laughed out loud at it :)

ps, SO COOL that you were quoted! i feel like i am cool knowing you. well, i felt cool before your quote. but now? sheeshka!

And no judgement on the swim-diaper hats either! Noah found them rather interesting and is insisting {demanding} I put one on his head! Awesome. Who knew you're kiddos were so fashion forward?! Please steer them away from any article of clothing over $10...would ya please? Maybe the paper would do a piece on what's hot for spring in Toddler fashion?

P.S. Are those pajamas on backwards?? Another trend? ;)

P.S.S. Congratulations on getting quoted! I feel really important just knowing you.

Well I wish I was smart enough to talk politics with you but I'm not. I'll just say I am a mom who WORKS very hard every day to make sure my children grow up to be pleasant members of society who can contribute. And if that isn't hard enough work, I don't know what is. But your little stinkers in their backward jammies and hats are pure adorable!! And I'm sure it takes a lot of work to nuture their creative minds and make a human being not to mention!!

We keep every little thing up-to-date so you understand bonuses, promotions, and evaluations are giving you bet365 the most recent data to help you|that will help you|that can help you} make the best choices. We function the best of every little thing, so you understand you’re only picking the best of the best. When it involves the best on-line casinos, gamers are spoiled for alternative. If you or somebody you understand has a playing downside and needs help, name GAMBLER in the U.S. Individuals must be 21+ to participate in sports activities betting and iGaming in the U.S.