So the props and tricks didn't work.  My doctor came back in and kept his doctor like vigil while I pushed for a while longer. (He left during the prop phase.)  Birthing a baby is strange business.  My doctor told me he had a meeting to go at noon and that it would last about an hour.  He asked me if I thought I could keep pushing while he was gone.  I asked him if I could take a break, I was so tired I didn't have the strength to even think about the word "push."  I imagined if I just laid there, the baby would eventually find his way out, right?  I would just lay in a position that he could walk on out and climb in my arms and we would take a nap together.  In my state of pushing, and being in pain and things not going how I thought they would, this was a fantastic (albeit absurd) thought.  I'd much rather think about this image than pushing.

Dr. Draper said of course I could rest and when he got back, we would try pushing some more.  I thankfully closed my eyes and had my hand ready to rub that hot spot on my hip when another contraction came.

That hour passed quickly and Dr. Draper was back, all chipper and asking me if I was ready to push.  Uggh.  No.  Still eeeeeeexsausted!  Contractions were still regular, powerful and often.  Yet, my little baby was not interested in going anywhere.  We tried a few more rounds of pushing. I mustered up strength.  Found something from down in the basement and really tried to help get the baby to moooove.  Nothing.

I head a sigh from my doctor and I could tell he was getting ready to tell me something.  "We have a couple of options," he said.  He was worried how stagnant the baby was and despite every signal that my body was ready to deliver a baby, the baby was not interested in being delivered.  We were at about 20 hours of labor, fully dilated, effaced, head down, everything but the movement of the baby.

This is the part of the story that has caused me so much delay in telling the rest of it.  I'm not happy about how my baby was born.  That's a hard thing to admit.  Hard to say out loud because I never want it to be confused or construed with my feelings of my baby being born period.  I'm incredibly happy about the event and I haven't missed a day thanking God for another sweet soul to nurture and hold.  But it's been a hard thing for me to remember and recall how things went.

Dr. Draper told me that our best option of having a regular delivery was a forceps delivery.  He would try one time, and if it didn't work, I would have to have a c-section.  It would be too dangerous to let me labor any longer with the baby being in the position it was in and NOT moving.  Because a c-section suddenly became a possible scenario, I would have to be prepped and ready for one.  The next phase of labor would happen in the O.R.  I paused.  Looked at Chris.  He took my hand and smiled.  I waited for my doctor to tell me my other option.  But he didn't.  This was it.  (I had lost control of the situation a long time ago.)  I numbly and wearily nodded my head in assent.

The nurse brought Chris some scrubs and he changed.  My monitors were being unplugged and I felt my bed move as the wheels were unlocked and moved away from the wall.  This was happening now.  They told Chris to put on his gear and stay in the room until they called him in.

And I was wheeled down the hall.

I wondered if this hospital had several rooms for situations like this.  Wondered if I would be taken to a part I had never been to before.  But my heart started to beat a little faster as I recognized the hallway and doors I was wheeled through.  It was the same room where I delivered my two pound babies.  Where they quickly took me down the hall, gave me drugs and cut me open because my body wouldn't do what it was supposed to do and these babies needed immediate NICU care.  So immediate that there is a window in the room where a nurse stood, blanket in hand,  she was the first one to hold my tiny babies.  Hold, resuscitate, whatever the situation called for.

Something triggered those dark days of waiting and watching tiny, sick bodies learn how to breathe and eat.  Although my bucket of joy and happiness about my older kids is much bigger than those three months of dull, consistent darkness, my heart went cold again at the memory of what happened here last time.  I didn't want my babies to be born 3 months early, but they were.  I didn't want to try and deliver my baby with forceps, in an operating room, but it was going to happen.  (I was not in control.)  I looked around at all the masked staff in the room.  A few were having their own conversations. (I couldn't tell what.)  My nurse would occasionally come to my side and ask me how I was doing.  I managed a faint smile, but my insides were terrified.  Her eyes were kind above her masked mouth, but the masks all around me only reminded me where I was and what being in this room meant.  Masks, masks, masks.  Muffled conversations behind those masks.  I glanced at small window in the back of the room.  I knew what was on the other side.  I fought back tears.  How did I end up here?  Again?

I looked up at the ceiling, trying to be a brave girl, and strangely grateful for the extra dose of drugs I got in anticipation for a c-section if needed.  My hip had finally stopped throbbing.  A few tears escaped my struggling ducts.  Be brave, I kept trying to tell myself.  This isn't the same situation as your first delivery. (Only the same room, doctor, little window, masks, medication, bright lights...)  Be brave. (Why did I think I could handle another baby?  I can barely keep up with my 2 year olds.) Be brave.  (How was this going to work?  FOUR kids?!? Am I crazy?  God must be joking sending me one more...)

Then I saw them. A pair of eyes hovered above mine. Those eyes.  I recognized those eyes.  Those beautiful blue eyes that my kids all had.  All three of them.  Maybe this one would have blue eyes too.  They belonged to my best friend.  My partner in this crazy journey we started together.  He leaned down, stroked my tangled, matted hair and said, "Hi baby."  My iced-over heart thawed, relaxed.  Oh yeah.  I remember.  I'm not doing this alone.  My strength, courage, and force of what makes me a woman and an intensely capable mother returned.

By now, the doctor was ready for me to push.  He told me he was going to have me push 4 or 5 times.  He played coach for a minute and gave me some kind of Rocky-esque speech on giving him all that I had. There was some kind of count down and I pushed.

Chris brought with him an air of renewed strength that I absorbed.  Three BIG pushes and my baby was out.  Chris leaned over, and looked at our new little one.  "Oh Kara, it's a boy!"  We didn't officially know until now.  I gave him an exhausted smile.  I was not surprised.  There are some things a woman just knows.  And I knew for the last 6 months leading up to my delivery that I was growing a little boy inside me.

He was big.  8 pounds, 15 ounces.  He didn't go through the window.  He came right into my arms.  My big, baby boy.  I marveled at his size and tried to take in everything I could at that awkward, laying down on a surgical table angle.  But from what I could see, he was perfect and he was here.  And at that moment, that's all that mattered. 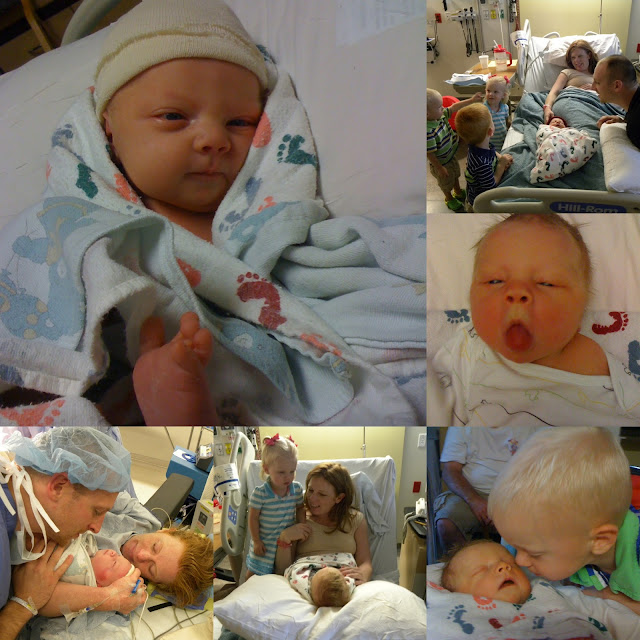 Being 33 weeks pregnant myself, this last post about Spencer's Birth Story just about had me in tears the whole time. Your writing was very eloquent and I am so happy your perfect little boy made it without surgery this time. Congrats, I am sure you are an amazing mom!