I am not getting my titles, are you?

Senor Christian! First of all, I call him Senor Christian because in the hospital I would always sing him that Night Ranger song. You know the one. Sister Christian oh the time has come, and you know that you're the only one...to say...ok. But he was a boy, so naturally, I had to swap sister for mister, and sometimes espanol sneaks into my language for no apparent reason. Because I clearly have no idea how to properly use it. So there you go. 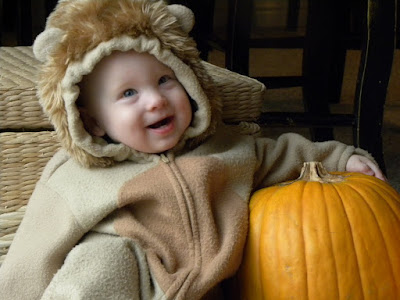 The Lion of our Zoo
Christian is 17 lbs and 1 ounce. He is 28 1/2 inches long. He has been crawling for weeks and his favorite activity is climbing anything and everything in his way as well as going out of his way to try and scale whatever he can get his hands on. He is extremely bright and smiley! He is so generous with his affection and is one of our star cuddlers. I don't want to call him the leader of the trio, I think it's a little early to make such defining statements. But, he does get followed around a lot. Not because I think he's the leader, but because he is so focused when he plays. He always has such a purpose. Or at least it looks like that to the others. So they follow him to see what exciting corner of the house he is headed to. 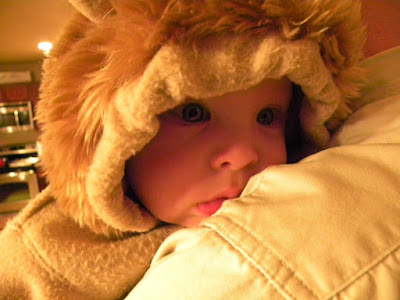 Our true cowardly lion at our family Halloween party. He was very shy and clung to dad. 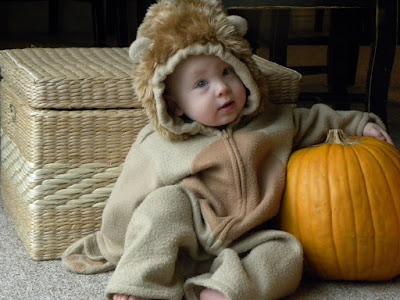 I can say with confidence that Christian is my best eater. He eats (with hearty gusto) whatever I put on a spoon and give to him. Spinach, beets, oatmeal, turkey and carrots, black bean dip, cauliflower, avacado, pears, apples, bananas, all kinds of squash, green beans, ANYTHING! It's nice. He makes me want to get real interesting with our food choices just to test him. When he is unhappy, he can really get that bottom lip out. He has a bit of a flare for the dramatic and I have NO idea where he would get that from. He is a happy, happy baby and makes each day such an adventure.
Posted by kara at Monday, November 15, 2010

Ah these make me so happy!

Don't you love it when they're cuddly and only want you or Chris? It's a great feeling.

Seriously cute little zoo you have!!! Couldn't be happier for you! I am always amazed how happy you look. I would be to exhausted to smile like that!

These are adorable. I hope all is well. What a fun family!!!