You've come a long way baby. It was the only sentence I could come up with for this post. I couldn't bear to actually put it as the title.

I'm one post off. The previous post of babies in the cupboard was not what I had in mind when I said I would post pictures of the little dudes next time. But I couldn't help myself.

So here is a few snap shots of my budding little one year olds. I hope you'll forgive the old pictures. No doubt you've seen them. But it's my mini, continuing birthday tribute to the bravest little fighters I've ever known. 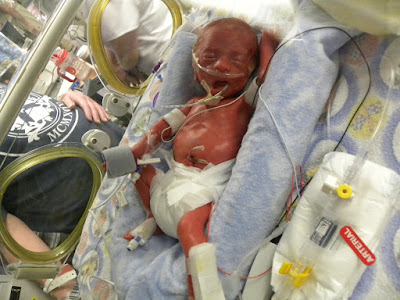 My baby A; aka Christian Hinckley circa first of January, 2010. Hanging out with his feeding tube, tiny iv, nasal cannula, and of course, my little sprawler. 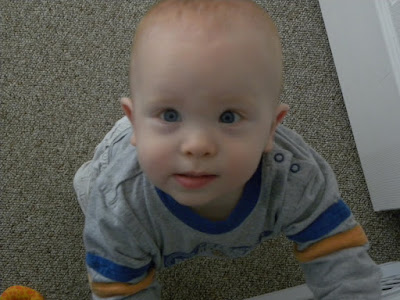 Christian Hinckley; aka big man, aka little bear, aka bruiser, circa January 2011. He loves to get up on knees and wave his hand in the air. Has a very busy schedule every day and doesn't have a lot of time to just sit and lounge. Will eat anything I put in front of him and has a tendency for the dramatic. (Getting really good and throwing his face into the ground in despair when something does not go his way.) Loves to climb into and play in boxes of all kinds. Is kind of a cowardly lion. Recently became terrified of packing material I was pulling out of a box. Kind of a mama's boy. Still a sprawler. 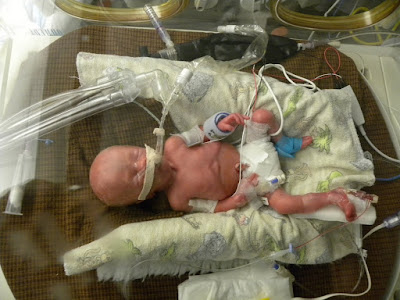 Baby B; aka Gabriel James, circa January 2010. Just chillin' with his ventilator that helped move his lungs up and down for him. I believe in this picture, he had just received a blood transfusion, has a tiny iv, and was about to get sick. 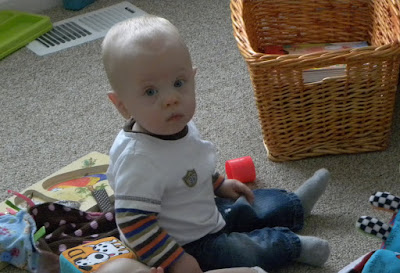 Gabriel James; aka Gabe, Gabers, Tiny Mite, Little Talker, and Uh Guh. (His nickname for himself.) Our Gabe loves to carry on a conversation to anyone that will listen. He's the fastest little guy his size I've ever seen. Kills it on his push toy. Zero to two miles an hour in 3.4 seconds. Loves a good rib tickle and playing peek a boo. Loves to knock down blocks and will always have something in his hands. Shows us his cute teeth all the time with his giant smile. Prefers puffs over cheerios, drinks from a sippy cup and is a scoach picky. Is the champion sleeper out of the three. 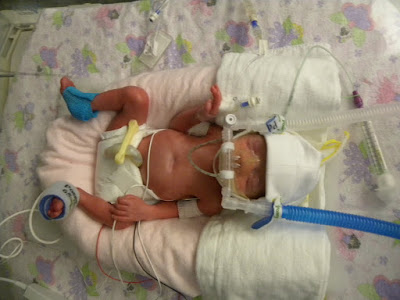 Baby C; aka Sunshine Grace, circa January 2010. Sitting pretty with her CPAP machine that would later be upgraded (or downgraded, depending on your point of view) to a double ventilator. Double. She was real sick. She too has a tiny iv and would be the last to eat, last to be on O2 vs a vent and last to come home. All of these things is because she wanted to decide herself. She would not be told how fast her healing would be. 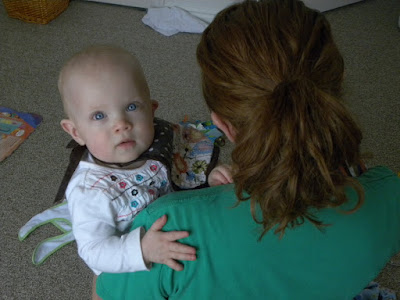 Sunshine Grace; aka Sunny, Little Miss, Pretty Princess, Peanut, Miss Thing, Button. Loves music and will sway and bounce to any music she hears, including accapella family night songs. Crawls on her hands and knees, drinks from a sippy cup, and does everything because it is her idea. She is my old soul. Her beautiful eyes have had many deep conversations with mom. You can't tell her what to do. She'll do it when she is ready. Just like when she was 28 weeks! Loves to play with ball-type toys. Loves her push toy. Much to her dad's delight, is a total daddy's girl.

So sweet. Love the updates :) and the pictures!

Happy Birthday Sweet Miracle Babies!!! And Happy First Year Mom and Dad!! You made it! =)

I'm so happy you're a mom and im so happy to have read this post. It is crazy how much a year will do. It is so fun to read how well a mom knows her babies. Those three are so lucky to have you as a mom!!'

i love reading all of the unique things about them. i marvel at how babies come with and keep their personality as much as they do! it's amazing!

Kara----I read your blog religiously, and looooved getting to see the comparisons and how far your little troupe has come! They are all so precious and beautiful! Hopefully I'll get to meet them someday!

it's truly amazing how far they've come in a year! your babies are absolutely adorable! hope they had a good birthday!

I enjoyed seeing their progress and reading about their personalities - Happy Birthday to each of them! I hope they will be good friends with Grant someday. :)

I can't believe how they have changed since September. By the time I see them again they will be walking. They have come a long way baby.

So amazing, Kara. What sweet little babies. And not so little anymore! Awesome (in the purest sense of the word).

You are so good at capturing who they are with words!