I may or may not have taken an extended absence in posting. Also, I may or may not like to use the phrase 'may or may not.' Also, thanks for the nudge to post something on my little web log. A little explanation about the lack of posting:

A) our computer is a new spot since we have moved.
2) it used to be in the same room as our TV
D) In the olden days, I would blog while Chris watched Sports Center

So, to sum up, I really like being in the same room as him. Even if we are doing different things. Our living room isn't exactly put together yet, so he isn't a big fan of plopping on the couch for a little DU DU DUN, DU DU DUN...THIS IS SPORTS CENTER...on a regular basis.

So, if this conversation was on the LSAT, you might say that I have been blogging less because Chris is watching less Sports Center. (makes total sense)

I'm not going to do a catch up post and tell you everything we've been doing over the last two weeks. But I do like lists as you may have noticed. (Or may have not noticed. ...eh, doesn't really work that way.)


And now, a reward for reading my list, pictures of my little munchkins and their dashing dad... 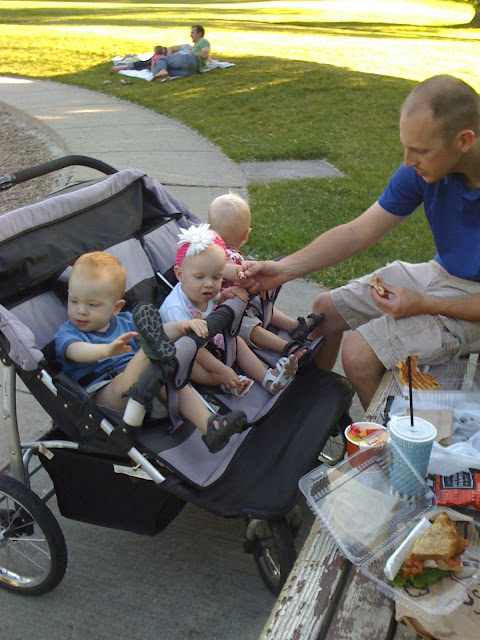 Dinner in the park. Sandwiches from The Corner Bakery at Red Butte. Yummmm. They actually ate pretty good. It felt like we were feeding ducks. Then we set them loose and chased everyone around. They loved it. We were exhausted! (and hungry again...) 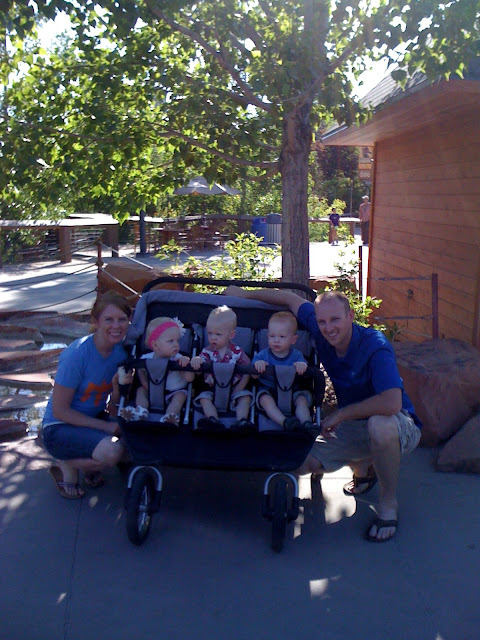 Our first family trip to the zoo! Is Hogle Zoo in a "growing" phase right now? We weren't terribly impressed. That, and sometimes I get a little sad at zoos. Don't ask. I'm weird. They did not like the animatronic dinosaurs that were around every corner. So we would have liked to see more animals and less mechanical dinosaurs. 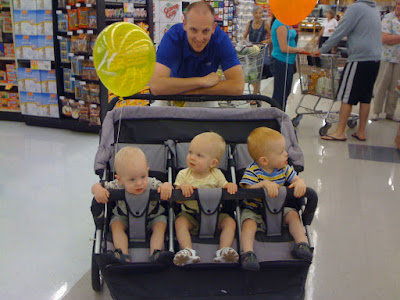 Remember how I mentioned I miss Day's Market in Heber? Harmon's is a happy replacement for me. Not only are their balloons complimentary, (I love that word) they genuinely care about the quality of their food. Good produce, lots of organic options, not just a huddled stash in a dark corner, hand trimmed chicken, an entire section devoted to cheese, complete with cheese attendants - I'm going to stop now. How exciting is this post huh? Glad you're still reading? 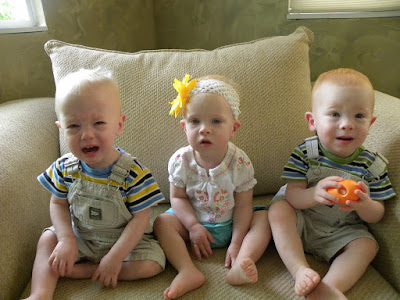 When I downloaded this picture for this post, the thumbnail was a little small and I thought it was the smiling one. It's not. But how realistic! This is a very common scene around here. Just replace poor Gabe's crying face with anyone else in this picture! We are (too) fast approaching the "Mom! Aren't you going to do anything?!? He just stole what I was playing with!" Except they don't use words. Just really loud wails and the occasional forehead smash to the floor in utter disdain and disgust about what goes on in their very own playroom.


That is us! As soon as my computer from 1994 finishes downloading our pictures we took during Ragnar, brace yourself for a week of Ragnar posts!
Posted by kara at Wednesday, June 29, 2011

Just today I was wondering when you were going to post again. I'm glad we are on the same page even living thousands of miles away. I love your posts, I love your lists, I love you pictures and I love looking at your babies. I still can't get over all three of them are the exact same age!! Why are triplets fascinating??

And free balloons at the grocery store??? That makes me so happy!!

I have missed your posts. I just can't get used to tweeting. The trips are getting soooo big. Love the pictures, it makes me wish August would get here faster. Congrats on the running, you are amazing.

thanks for the catch-up! love the last pic. the kids look older (and wiser, too). excited for tomorrow! get your 4th of july face on!

so glad i got to catch up on your life! You're family is sooooo adorable!!! You look great, and i get sad at zoo's too... i think i understand. Have you tried Macey's? I loved it while i was in the area....where are you living anyway?