Spencer Walked While I Ate Guac

Spencer took his first steps the other day.  We've been waiting for this a long time.  He'll be turning three years old in 2 1/2 months.  He has a hearty appetite and although his motor skills are behind, his growth isn't.  So not only have I been wanting him to learn to walk so he could have the freedom to roam and have a whole new world open up at 3 feet tall, he is just plain heavy!  So getting his little legs going has been on our list of "Goals for Spencer" for a really long time.

So he walked!  He took about 4 steps on his own, then plunked down and crawled the rest of the way to the gate he was headed for.  Doors, hinges, anything that swings open, he is obsessed with.  And that day in the park, when he took his first steps, he was headed for that gate.

When I saw it, I was so proud I could burst.  I clapped my hands over my mouth and my eyes got teary.  I was emotional with pride and excitement.  The milestones Spencer reaches have a little bit more gravitas than a typical child.  The first time he fed himself, the first time he said "mama," all these little things have the added weight of doing them nearly 18 months after his peers, so it's just extra special.

A lot of thoughts remained in my head for a few moments.  They mingled together.  Stewed and sat as I took a moment to process this weird feeling of elation over his accomplishments and guilt for not being there.  I mean, I've never regretted the non-GMO guac and extra carnitas with a splash of chipotle tabasco, but HIS FIRST STEPS.  And I missed it.  It should've been me in the park that afternoon.

But here's what my thought stew turned into:

1) I am one woman.
I simply can't be everything to everyone in my family.  I already knew this.  I just had to remind myself of this supernal truth that has saved me these years of being mom to triplets and a special needs little boy.  If I was everywhere, all the time, at all the important moments and milestones and never missed ONE THING...I'd be a wreck.  This is my truth.  I can't speak for all moms, but this is me.  I need that alone time where I can eat one meal a week without little people climbing in my lap or needing to shovel food in as fast as possible because x,y and z is waiting to be cleaned, folded, put away, swept up, wiped down, packed, whatever.  I need that time to just be.  And that's what I was doing that day.  I was taking time to order extra guacamole, get some pants hemmed I bought for my birthday last month and listen to an audio book between errands.  I don't regret any of those things I chose to do for myself. (I'll never regret guac.)

2) Spencer needs other people to grow.
Spencer and I have a unique bond.  I am his world.  If I am in the room, he becomes my magnet.  He doesn't sit with me the same way he does with his dad.  If Chris is holding him, or laying in bed with him, he will perch comfortably in his arms and appear content.  If I am next to him, he nuzzles his tiny face into mine however he can.  He presses so hard into my cheeks.  He doesn't want to lay next to me, he wants to unzip my skin and crawl inside me.  It's like he can't get close enough.  When we first started therapy, (like physical and occupational--but I'm sure we'll both need the emotional kind someday, you know for the guac guilt and face smashing) it became pretty clear that he would do more with his therapists if I left the room.  I was some kind of emotional crutch for pushing past those barriers of discomfort.  So when therapy is in session, I step away.  I pop in every now and then if I can hear that he needs some motivation to keep moving down the hallway or is getting extra grumpy with his honey sweet therapists.  I remembered this in the parking lot, as I quietly wiped a tear from my cheek.  Spencer will always need other people in his life to grow.  As much as we both want it to be a two man show between the two of us, I have to step away.  This is our truth.  I can't speak for all mothers with special needs children, but this is us.

So Spencer walked the other day while I was eating a carnitas salad.  He hasn't had a repeat performance, even with me trying to recreate the exact same scenario.  But I have watched that clip about 80 times, with 10 of those being with him.  We sat and watched his wobbly steps, one, two, three, four, plunk.  He smiled and I clapped for him, gave him a kiss and told him what a big boy he was. 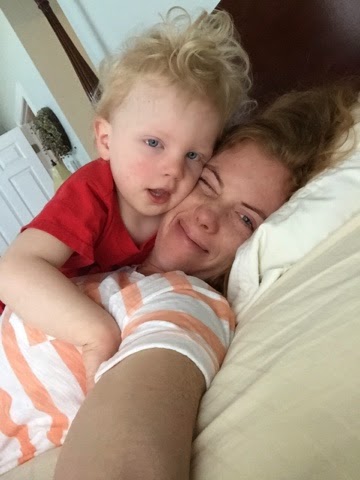 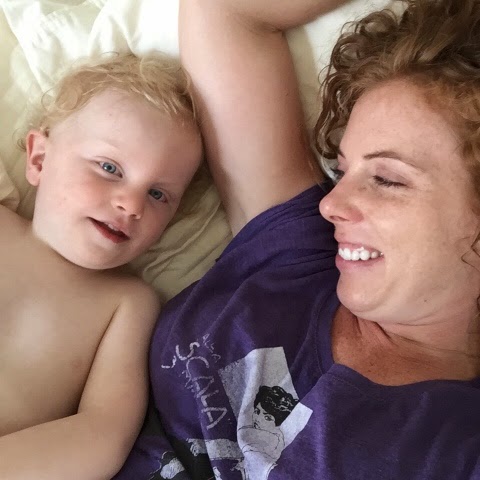 Please please write a book, write a million books in all your spare time so I can read them all in my spare time! You are amazing and I'm so happy for you and Spencer!! Way to go buddy!