I'll be running a marathon this Saturday. Six months ago, on a cold January night, with a gut loaded with chocolate cream pie and parmesan spinach dip, I had a spasm of goals and resolutions. I decided 2011 would be the year to race. No plans to get pregnant. No nagging knee pain. This was the year. Feet up on my couch, laptop ready, I searched for the perfect “first marathon.” If you read running articles or magazines, there are bullets and lists of how to find the perfect first marathon. I didn’t read any of those articles. I found one that was close, cheap and six months away. Those were my only requirements. I came across the Wasatch Back Marathon that would take place in beautiful Midway, Ut. At the time, I lived in Heber, 6 miles away from Midway. It would be a quick car trip. I was also looking forward to the pretty scenery and views that I was already familiar with, living in this mountain valley.


I coerced a friend into considering running it with me. It’s always so much easier to train when you have someone else relying on you to finish the race with. She looked up the info on the race and got back to me about it.

“Have you seen the course?” She said, almost laughing.

“Uh, no, not really,” was my sheepish reply.

Then, she informed me that her husband, who was planning on competing in an Ironman later that year told her I was crazy for picking this race as my first marathon. Keep in mind an Ironman is a marathon where you also bike 112 miles and swim two miles before you run the marathon. This guy was telling me I was nuts.

The course is hilly. It’s mountainous. It’s terrain is, well, rugged. It is 14 miles, up hill, a 3000 foot elevation climb, then the remaining 12.2 miles is down hill. Sixty-percent of the course is on trails. No gentle beginning miles with a gradual slope in the middle. No slight uphill around mile 9 with the rest of the way winding and easy. In other words, I was crazy for picking this race as my first marathon.

But I was calm about my decision. Even after I heard the insane details of the elevation climb, then drop, the trails, the cougars (ok, no cougars, but there might as well be). Because I had made the decision and frankly, I can do hard things. I haven’t always known this. The last few years have kind of helped cement this mantra in my heart. I can do hard things.

I found this out a couple years ago when I was running a 188-mile relay race with friends. This race was a 33 hour, no sleep, run until you’re done, then get up and run some more kind of race. When it was my turn to run my last leg, I knew I couldn’t do it. I was trying to think of what I would tell my team and who would be the one to run for me. Because at this stage of the race, on 3 hours of sleep, there was no way I could run those 3.2 miles up a 12% grade. Sorry. I was done. But then all the sudden it was my turn and I hadn’t thought of anything to tell anyone! I was at the checkpoint, the runner in front of me would be here any second. I had to do it. And I did. It was grueling. It was painful. I remember it rained a little. I walked one minute, ran one minute for all 3.2 miles. But I did it. I actually did it. I can do hard things.

These five words were also made known me a few months later. After trying, failing, trying and trying, then trying with the help of a doctor, I was pregnant. One pregnancy, three babies. I was having triplets. I had never been a mom before. I did not have the secret handbook of all good mothers at my disposal. (Still haven’t found that darn book!) I had no first born to practice on before three came at once. I was having three babies. I would be lying if I said I had it all together and it was going to be great and bluebirds were going to come in my windows every morning to help change diapers and warm up bottles. I was nearly paralyzed with fear of failing as a mother almost every day while I was pregnant. The bigger I got, I bigger the fear. I didn’t even know if I could be a good mom to one baby. How was I going to handle three? What if I didn’t love them enough? What if I didn’t have enough of “me” to go around? Love, arms, breasts, time. What if I don’t really know them because there are three of them? What if I bunched them all up and always referred to them as “the triplets,” making their individual names obsolete? What I accidentally left one of them at the store? Real. Paralyzing. Fear. But nature has a way of marching on, regardless of your feelings about the future. One day, they came. It was hard. We spent a lot of time in the hospital. They were tiny. I was scared I was going to do something wrong. I was scared they weren’t going to make it. But all of the sudden they have a first birthday. We celebrate with friends and family and I realize that I have three, healthy, smiling babies. 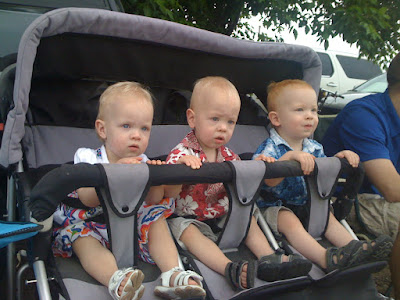 My once preemie toddlers enjoying a parade

I love all of them so deeply. I know all their unique quirks and personalities. They are all so different. I love them so completely and whole as the individuals they are. I can do hard things.

So, bring it on 14 miles of unrelenting uphill and 3000 feet climb in elevation. Do your worst 12.2 miles of downhill. Come what may cougars. I’ve trained for you. I woke up early (before the babies) and ran dem hills. I’ve put the miles on my shoes on the weekends. I’m ready. Because I can do hard things.

Epilogue: My friend who I begged coerced back in January to run with me is absolutely running this thing. 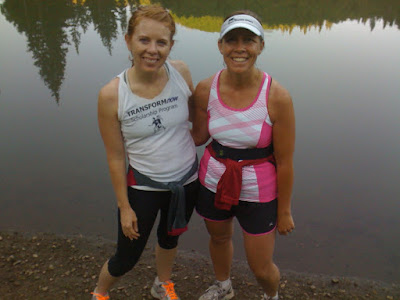 Steph and I on our last Saturday training run

Those training miles are long and hard without a friend. I'm thankful for her. We've been eating hills for breakfast for months and feel ready-- like rockstars. Her once naysayer "ya'll are crazy" ironman husband has turned into one of our biggest fans. He has tagged along on some long runs and even made us a mixed tape (er, CD) full of super woman songs. I have lots of supporters and cheer leaders for this race. The one is the MOST good-looking and supportive of them all deserves his own post. So, more to come...

Email ThisBlogThis!Share to TwitterShare to FacebookShare to Pinterest
Labels: running, wasatch back marathon

What a great post, my friend! You have a very encouraging attitude, and I look forward to reading about how you conquer the race! Best of luck to you!

ps, i was just saying the other night that i'm going to make a GIANT sign with this same mantra for my classroom. a comma rule to a 7th grader is TWO marathons to a veteran runner like you.

woo!! (that was the only way i could think to end this comment)

26.2 trail marathon???? Is there any other? Doing hard things is in your DNA, you are committed, you will conquer,you have courage. Just do it! I'm out of cliches, so just keep shuffling :)

We will be thinking of you. Congrats for completing the race (because I know you will). You are officially my Superwoman. You have proven to alot of people that we can have it all. Love you

still my hero. love ya.

wow, you are amazing. I need to jump back on the wagon. You CAN do hard things thats for sure...its funny actually because a couple of weeks ago i was asked to give a talk to a girls camp and my theme was "I can do hard things". Good luck Saturday!

To say I am excited for you doesn't really do it justice. Loved the post. Love that you are doing this race. Can't wait to hear how it goes.