Where Is Annie Oakley When You Need Her? 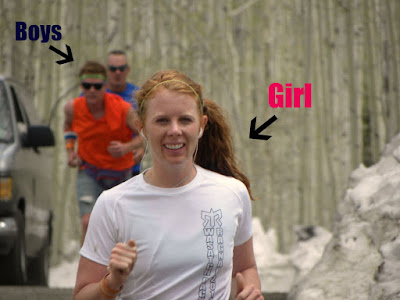 I swear I'm not a women's lib gal. I do lean a little to the independent side. I used to flat out lie straight down on the independent side, but getting married straightened me up a bit. Not in a bad, my husband expects me to stay in the kitchen sort of way. Just in a, I really don't like taking out the garbage, and if you're going to do it, I'm so okay with it, kind of way.
But I was born in 1980. Not 1935. I was raised by a woman who once took her husband to Hawaii on a sales trip she had won. Twice. So the mantra of "anything you can do, I can do better," kind of resonates with me. I understand that men and women have their differences, I get it. I'll never be able to do more than 2 pull-ups and his hips will never have the ability widen when needed.
But if one more person sees the Ragnar sticker on our van and immediately asks Chris if he's a runner, I think I'm going to scream.
(These aren't people just from the older generation either. I'm talking OUR generation people.)
Women DO run! It's 2011, in case you haven't noticed. And, just so you know, I can actually run MUCH further than my husband at the moment. So, (tongue sticking out in a really, classy, lady-like fashion) there!!

And for full disclosure: both guys passed me about 50 yards before the checkpoint. But then I passed orange shirt guy again. I never said I was the fastest runner there ever was, but I DO run.


My marathon is only weeks away!

Email ThisBlogThis!Share to TwitterShare to FacebookShare to Pinterest
Labels: girl power, I live in 2011 not 1935, running

I am so proud of you. You are my hero. Anyone who can run and raise 3 babies at once is a powerful strong woman. Keep it up and to heck to the people who question you.

Interesting, NO ONE has asked who the runner is in our car, they take a look at our non-runners physique and assume we are borrowing the car! You go girl, tall, short, slender, plump, we all run!

Male or female too!

You know how I feel about women runners. Two weeks until you triumph, Wonder Woman.