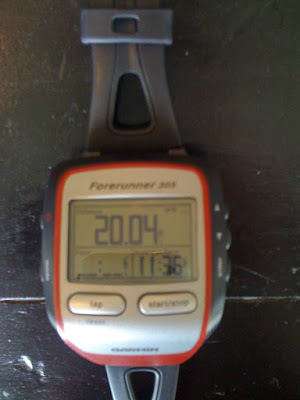 I did something last Saturday. One thing. I probably did more than one thing if one were to get technical about it, but it felt like I only did one thing.

I ran twenty miles and I did it on purpose.

The marathon I also signed up for on purpose is two months away. I shouldn't have signed up for this particular marathon. There were other races I should've looked into. But what's done is done. I'm committed and going to do it. I'll write more about that later.

I'm grateful for these training runs. They help in more ways than just logging the miles. Like the fact that I thought I was going to literally die around mile 18. That's probably something I can work on before the race. Or how I finished a mile away from my house. (Bad idea.)

The mile walk back to my place felt like I was toting around two bags of cement disguised as my legs. It was all I could do to not lay down on some random stranger's lawn and call for them.

"Hello! Is someone in there? I live a block away from here but I need a ride home. Hello? Can anyone hear me? I might also need to use your bathroom. Are you barbequing? I can smell something good, I think. I'm not sure. I think I might also be hallucinating. Hello? Anyone?"

Don't worry. I didn't prostrate myself on anyone's grass and yell incoherent things. But I wanted to.

I wore my trusty Garmin watch. When the little screen did indeed confirm I had traveled 20 miles by the power of my own two legs that day, something happened I did not except. I cried. It wasn't a blubbering, sobbing type of mess. Tears just silently fell down my sunblocked, sweaty cheeks as I realized I had just done something I had never done before. And it was hard. And I wanted to quit. But I didn't.

It was unexpected, but not unfamiliar. It was the same emotions I felt when I actually got an "A" in my anatomy and physiology class in college. Or when the babies finally started sleeping through the night and I realized I still knew my name and was still grateful to be a mom.

Twenty miles. I don't break records and my name has never been in the top five of any race, but I know I'm a runner. Because even after all that, I'm still excited to run that 26.2.
Posted by kara at Wednesday, May 25, 2011

Email ThisBlogThis!Share to TwitterShare to FacebookShare to Pinterest
Labels: running

LOL the way you put things cracks me up. Good luck on your marathon.

We are so proud of you. I don't know of anyone who can do all that you do. I wish we could be there to cheer you on at the finish line, but we will be there in spirit. love to you all.

Oh my gosh thats amazing!! I envy you runners....I absolutely hate it but then again i am not good at it....lol Good Luck!