We all practiced saying "yes" today.  Even mommy.  Do you know how many times I hear the word "no" in a day?

Neither do I.  But pick a double digit number and multiply it by three.  Which got me thinking.  If I hear "no" a lot, then they must hear it a lot too.  It's never a singular "no" either.  It's always no, no, no.

Something has happened this last month.  My babies are real, legit toddlers.  I know this sounds strange, but it has gotten really hard.  I know you're thinking, "uh, hasn't it always been hard?"  Eh, yes and no.

Sure it was tough when everyone needed to eat every 3 hours.  But I also had a lot more extra people coming in and out, offering their services.  I also lived close to family who would stay late, come early, middle of the day, whatever.

But here we are in this new stage of independence and choice.  And it's just us, until 6pm, when dad is welcomed home by cheers of joy and relief from all four of us.

"Sunny, do you want a graham cracker?"

"Noooooo! Nooooooo! No. No. No! Nooooo!"  Followed by wailing, cries and exasperated moans and groans.

"Sunny, what's wrong, why are you crying?"

"You want a cracker?"

So it goes.  I don't want to pin it all on Sunny either.  Insert any one of my children in the above scenario.  You could even plug me into the wailer role sometimes.  Shoot.  More often than not, probably.

But I don't mean for this to be a complainer post.  It's not.  It's really meant to be the opposite.  I suppose I should get around to that.

Lately, I've been really thankful for the experienced mothers in my life.  The ones who have hindsight, years and wisdom on their side.  Like an aunt who recently pulled me aside, pointed to my darlings running amuck in the church cultural hall and flat out told me:

"Uh, this is a really hard stage.  Like, really hard.  But it does get better.  So just pick your battles and don't cave on what's important."

She must have been inspired.  Because at the time, they weren't quite as headstrong and sure-willed as they are now.  It pretty much happened the next day though.  I didn't forget what she said.

I'm also thankful for a conversation with another aunt (there are a bunch of great women in my life) who said a simple thing that I might actually sew into a pillow as soon as I have the time.  I was bemoaning the fact that my house seems to be in a constant state of disarray and that I didn't think that every room would EVER be clean all at the same time.  Just stating facts about our life.  She said:

"Just remember, you're raising kids, not a house."

Yup.  I am.  It's a pretty important job too.  I do take it very serious.  Even when I feel completely unfit for the task at hand.  Even when I think God must have made a mistake when he assigned these three, STRONG, little spirits to come learn life lessons by me.  Even when some days I feel like a full-time referee instead of a mother.  Even then.

One mother, still raising her last one, said this to me about 4 years ago, when my reality was more doctor appointments and fertility tests than diapers and sippy cups.  She's one of my favorite wisdom endowed mothers.  She also happens to be mine.  She said:

"You know Kara, for some reason, I just see you someday with a bunch of little hands at your knees, all looking up to you and wanting something.  You're going to look back at this (at me being barren that is) and wonder why you were in such a hurry for it to all happen."

Call it mother's intuition.  Call it inspiration.  But she was right.  I think about this sometimes.  Especially when I actually do have six hands at my knees, all looking up at me, wanting something.  I remember how wonderful that image sounded years ago.  Then, I remember to be grateful.

Because I am.  So very grateful. 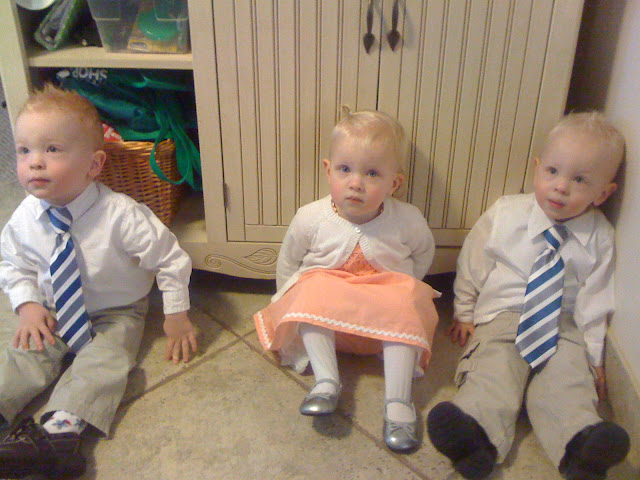 Email ThisBlogThis!Share to TwitterShare to FacebookShare to Pinterest
Labels: my three crazy toddlers

Funny, I was just thinking about that comment the other day, I was saying prayers and offering gratitude for the strong women my daughters have become, and the strong spirits they have stewardship over. I was feeling a bit stressed over your responsibilities, and guilt over my lack of participation in your day to day activities. The spirit gently nudged me and I was reminded you are all up to the task, and you are not alone. The angels I ask to attend you, show up!