The Proof Is In The Stabbed Fruit

This picture is my evidence. 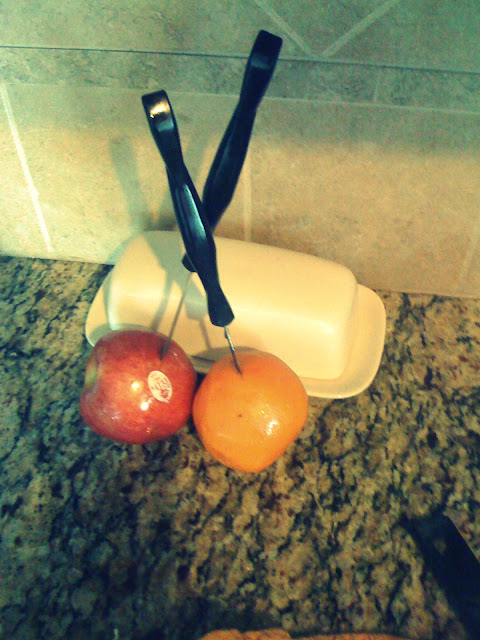 Evidence that there is a gang of guardian angels hanging around my house all day.  I was in the middle of changing a stinky diaper, one little one was coloring at the table, and the other little one was apparently stabbing fruit with extremely sharp knives.

I've since rearranged a few things in the kitchen.  Pushing chairs around to get at things on the counter is the latest maneuver in toddler trickery.

When I saw those blasted knives sunk so deep in that fruit I felt so crazy as a mother.  I felt a little sick my little guy was just playing with knives.  How was I to securely fasten everyone in a safe place while I take 4 minutes to change a diaper?  Because that's how long I was unattending the unattended children.

Then, I thought that I am not alone in my house when I am alone.  I know this.  It's something I believe.  The same way I believe that when the sun sets over the west mountains here, it's rising somewhere else.

I'm not sure how many guardian angels are assigned to my crew.  I imagine, at this stage, a group of 2 or 3, watching over and protecting them, then tagging in another group when their brilliant wings start to get a little droopy from fatigue.  I'm pretty sure I'm not the only one relieved when it's finally bedtime.

I do know they (my angels) have been with us since the beginning.  I felt them in the hospital when I sensed these tiny little beings, not supposed to be born yet, were scared and unsure about their new surroundings of machines, pumps, tubes and needles.  I knew they were there when my own fears of knowing the only thing keeping my daughter and son alive was a machine pumping air into their lungs.

I felt them when I brought them home and I was panicked that they were going to stop breathing in the middle of the night and I would never know because I knew as soon as my eyes closed, my mind would be in a deep, exhausted, coma-like sleep.

I felt them when our ultra-baby-proof play room (we thought) was about to be breached when Sunny tried to shimmy under a railing, that, had she succeeded, would've caused a 12 foot drop onto stairs.  I had no reason to look in her direction (she was near the books, being quiet) and realize this except an unseen tap on my shoulder telling me to turn around.

I believe in angels.

I also believe in angels that I can see.  Angels that have also been with me and my kids since the beginning.  Helping me, encouraging me, doing a night-time feeding or two, giving me a 2 hour break on a Tuesday, bringing in gifts that mean a continued nap time for my two year olds that really still need it.  Angels that randomly and without any prompting from me, tell me that they know what I'm doing is hard, but worthwhile.  Angels that pray for us.  Angels that visit.  Angels that send us clothes.  Angels that simply care about our little family.

Without them, I never would've known so many others. 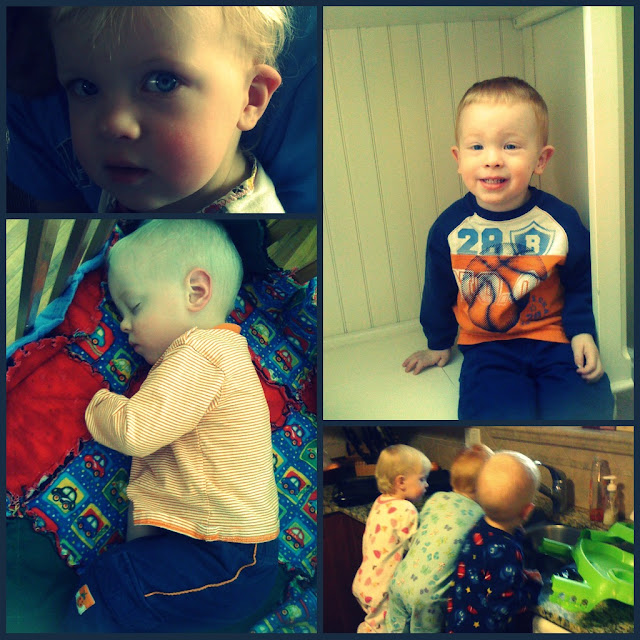 Email ThisBlogThis!Share to TwitterShare to FacebookShare to Pinterest
Labels: I am blessed, my three crazy toddlers, What I Believe, what is the word for a group of guardian angels

Love it! I do believe in angels as well. They do help to make the home a secure place. They are also our warriors helping us to protect the hearth. We need all the help we can get and the Lord knows what we need. Thank you for all that you do. We really admire what you do and I know there are times when we all want to just give up, but those angels are what help us to keep going. Love you my "warrior princess" cousin. :)

and maybe it's called a flock of angels... just an idea.

That is very true. You put into words what I have also been experiencing and feeling in my own little way for the past 3 years. My triplets are 2 also and I had a similar experience a few weeks ago... I turned my head for a minute and found about 10 knives between them (they climbed up and found the knife drawer). I know that angels were there for us too. Thanks for sharing. I know that angels --both seen and unseen-- are among all of us.

you're not supposed to make me tear up at school! good thing i don't have students at this second. christian looks SO grown up in that picture of him in the cupboard/hutch thing.

@Mindy, didn't you know I write every post with the goal of making you cry in mind? Especially at school.