HypnoBirthing According to Kara: Part I

the descent of the uterus into the pelvic cavity, occurring toward the end of pregnancy, changing the contour of the abdomen and facilitating breathing by lessening pressure under the diaphragm.

Ok, who coined this term?  Lightening?  Really.  Because I don't think there is anything "light" about feeling like you are walking with a bowling ball between your legs.  Which is what I feel like.  Waddle, waddle, waddle.  That's where I am at 37 weeks.  It's more like heavy-ing than lightening.  (Best part about blogging is making up your own words.)

I've had many (2) questions and requests about going into further detail about my plans for having a hypnobirth.  The name itself sounds mysterious and strange.  Before I divulge the secrets and legends behind this method, I have a few disclaimers.

I FIRMLY believe (like, a lot) that every mother has the right and privilege to have her baby in the best way that she deems fit.  Meaning, I'm definitely not going to tell you that hypnobirthing is the way to go.  Or imply that you've failed as a woman if you don't have a c-section, a VBAC, an epidural, or bite on a stick, a home birth, or squat next to a tree as you gently deliver your baby into a pile of leaves.

Uh uh.  Each woman, baby and birth is different.  I don't think one way is the right way. With that said, I'll share my reasons why I've decided to have this kind of delivery.

My triplets were somewhat of an unplanned, emergency c-section.  I was planning on having a c-section, but not 3 months early.  I was unprepared, a nervous wreck and totally in la-la land from drugs and pain meds for a long time.  When I found out I was pregnant with this little peanut, I knew I wanted a completely different experience.

I didn't know exactly what, but I started with a google search. (Most good journeys start here, right?)  I ended up searching the terms "natural," "painless" and "childbirth."  I had no idea what I would come up with.  But this term "hypnobirth" kept coming up.  So I investigated...

A hypnobirth is a vaginal delivery free of drugs and medication.  The idea is to put yourself into a state of deep relaxation so your delivery is easy, gentle and free of pain.

The theory is that our western society has a deep rooted idea of fear being associated with childbirth.  Think about movies and television and other portrayals of births you've seen--  screaming women in pain and agony.  There is even a suggestion that Eve, our first mother, plays a role in this fear.  The bible tells us that she was cast out of the garden and told she would bring forth children "in sorrow."  So we have this imbedded idea that childbirth is hard and painful, which is scary.  Pain equals fear.

The science behind the idea is that your body releases a chemical called catecholamine during times of fear and stress.  This is associated with the "fight or flight" reaction.  Since you can't do either during childbirth, your body tenses up and all your muscles become tight and rigid.

All these tight muscles actually work against the idea of your baby being born, instead of allowing it to happen.  You "push," but you're pushing against super tense muscles, all the while your subconscious is telling you your contractions are painful, having a baby is painful, pain, pain, fear, fear, more catecholamine released, more tense and nervous muscles-- including the ones used to birth your baby.

Hypnobirthing trains you to relax every muscle in your body and breath your baby down and out.  You also reprogram your subconscious and your ideas about childbirth.  Instead of your body releasing catecholamine, you release these wonderful, natural endorphins.  There are some cultures and plenty of stories of women giving birth without pain, and that's the norm for them.

I have more information to give you.  We'll call this part one.  More to come: my daily affirmations (real zen-like stuff), practicing relaxing (love this) and what Chris' role will be in all this new-age mumbo jumbo (he's a good sport).

ALSO!  I was given a super-duper, excellent, awesome, extraordinary baby shower that involved no onesies, sleepers, outfits or diapers.  It was so great for a mom that has all that. (Well, let's be honest, I could always use more diapers.)  Here's a preview: 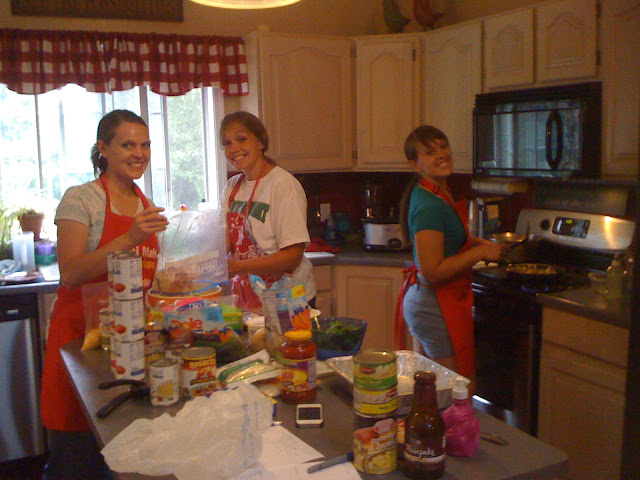 I enjoyed your post. I hope your next birth experience is as you imagine. The humor in your story was lots of fun...I liked your word heavy-ing and agree that it is probably more accurate.

The shower photo is cute.

who's the stone cold fox in the middle? the one with the bad hair and the t-shirt? ow ow!

I feel like a new woman! All this time I'm super into hypnobirthing and I didn't even know it. I thought it was some weird crazy way to have a baby. But I am one of those crazies that loves being in labor. I think it is the most exciting thing my body has ever done and I love the feeling of a miracle happening in my body. I've been crazy surprised with how calm and peaceful I have felt both times I was in labor. I confess, i've had the epidural twice hahahha :) but I think next time I want to try without. Nope, not pregnant. But maybe someday :) Can't wait to hear your labor story! I love labor stories! good luck!! And can't wait to see pics, find out gender, and name!!

I am kinda hoping the next goes too fast for an epidural. Then the decision will be made for me, you know? Good luck - it'll be fantastic no matter what!

I've heard of hypnobirthing, but don't know anything about it. I'd love to learn more and hope you will continue to post your thoughts on it.

And your meal shower is an awesome idea! Kudos to whoever came up with it! :)

My sister swore by hypnobirthing... up until she had contractions and opted for the epidural haha. Either way this delivery will be totally different from your last and it will be amazing. Good luck and may you have a fast and pain free delivery :)

YEAY! i am soooooo excited to hear about your personal experience with hypnobirthing! maybe it'll inspire me to try it myself this time around! i one million percent loved my birth experience with abigail but i also got the epidural... even though it didn't fully kick in til i was already at a ten. i'm trying to figure out what i want to do this time around and since i kind of idolize you, this should be very helpful indeed.

I have a cousin who opted for hypnobirthing with her last three (She has 5) And she just exhales those babies out! No drugs and hardly any pain. I completely agree that every woman on the planet has a right to give birth how she wants. I opted for the epidural (which didn't work until I was at a 9. But until then I was surprisingly calm so I probably could have done it, but am glad I had those drugs to deliver!) I know you will be able to do it. I'm excited to find out if it's a girl or boy!